NORMAN, Okla. (AP) — Even one of the best nights ever for an Oklahoma player wasn’t good enough for Jalen Hurts.

The new Sooners quarterback passed for three touchdowns and ran for three more, and No. 4 Oklahoma rolled past Houston 49-31 on Sunday night.

It was Hurts’ first game for the Sooners since he transferred from Alabama. He put on a show as his predecessor, 2018 Heisman Trophy winner Kyler Murray, watched. He posted 508 total yards, the fifth-most in school history.

Hurts was not impressed. And at a school that has produced back-to-back Heisman-winning quarterbacks in Baker Mayfield and Murray, nitpicking has become the norm at that position.

“We did some really good things out there tonight, but there are a lot of things we can improve on,” he said. “We’ve got to take that next step.”

Hurts started at Alabama for two years before losing the job to Tua Tagovailoa. He stayed as a backup at Alabama last season, then transferred to Oklahoma and won the starting job in preseason camp.

“He played good,” Riley said. “There were things he could do better, but I thought he handled the moment good. You could tell out there that he’d been in it, certainly. I’m sure he had some nerves, but he did a good job managing them.”

Houston coach Dana Holgorsen, who coached at West Virginia before making his Houston debut on Sunday night, said he sees no drop-off in Oklahoma’s play. 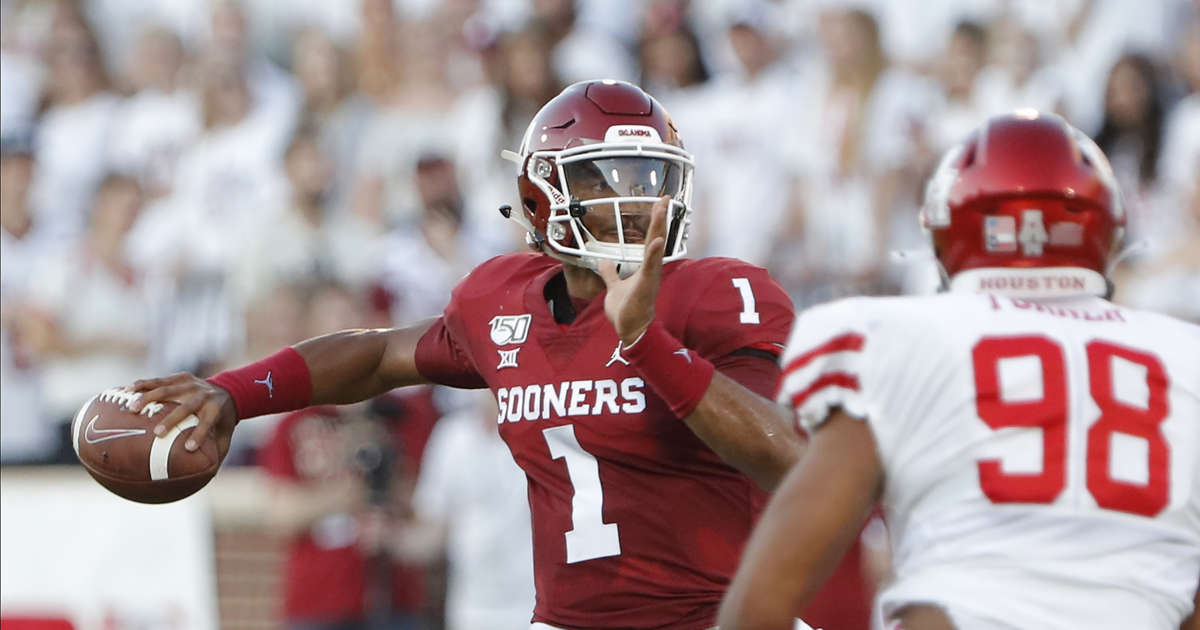 Charleston Rambo caught three passes for 105 yards and a touchdown and Trey Sermon ran for 91 yards for Oklahoma.

Oklahoma’s defense was sharp too, constantly pressuring Houston quarterback D’Eriq King and limiting him to 87 yards passing in the first half. King, one of the nation’s top quarterbacks last season, finished with just 167 yards passing. Though King rushed for 103 yards, Riley felt the Sooners kept him and the Cougars under control.

“I thought our defense flew around, was extremely active, extremely disruptive for the majority of the game,” Riley said.

Houston: The offensive and defensive lines struggled, and that decided the game. The Cougars couldn’t keep the Sooners away from King early in the game. He had his moments, but he couldn’t produce when Oklahoma established itself in the first half. Oklahoma’s offense was only stopped when it self-destructed.

Oklahoma: The offense looked sharp with Hurts, and Riley showed he can still get results from a very different quarterback than he has used in the past. The defense was more aggressive and tackled better than in recent years in its first game under new coordinator Alex Grinch. The Sooners forced three-and-outs on Houston’s first two possessions to set the tone.

Jalen Hurts’ 128 yards rushing in the first half matched a school record for a quarterback in a first half. He tied Jamelle Holieway’s performance in 1985 against Kansas. Hurts’ full-game total was the second-best for an Oklahoma quarterback. Thomas Lott ran for 195 yards against Kansas State in 1976, when the Sooners were running the wishbone.

Murray, the preseason Big 12 Defensive Player of the Year, led the team with 155 tackles last year.

Oklahoma had its College Football Playoff hopes derailed in 2016 when Houston defeated the Sooners 33-23 in the season opener. Oklahoma was never threatened in this game after the first quarter.

“We knew we weren’t going to catch these guys sleeping today, so it is what it is,” Holgorsen said. “They’re a top-five team, deservedly so.”

There’s nowhere to go for the Sooners because the teams above them won, but they solidified their position.